The VISION Act – help us advocate for immigrant justice 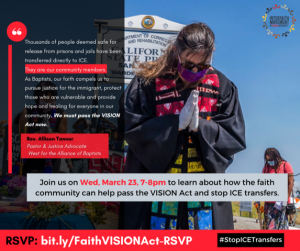 Lakeshore supports passage of the VISION Act (AB 937), an important piece of legislation that would end the prison to ICE detention pipeline. Even though California is a Sanctuary State, prisons and jails still coordinate with ICE upon the release of incarcerated individuals who have earned their freedom – which results in double punishment for our non-citizen brothers and sisters. Our friend Oscar was caught in this pipeline and, having completed a five-month jail sentence, instead of returning to his family was transferred directly to ICE detention. He reminded in detention four years before we were able to help secure his release. This travesty is experienced by numerous immigrants, as ICE relies on these transfers to populate their detention centers.

Lakeshore’s Sanctuary Working Group has made passage of this legislation a top priority in our work for the past two years, and we are finally close to making it happen – but we need your help! Last year the VISION Act was approved by the California Assembly and is currently on the Senate floor. We need three more California Senators to agree to vote for the VISION Act for it to pass. Once this happens, the bill goes to Governor Newsom’s desk for a signature.

We invite you to join us for a Faith Action Hour for the VISION Act on Wed, March 23, 7-8pm via zoom, to learn about how to stop ICE transfers in California, hear from directly impacted community members, and take action as the faith community. We will be reaching out to key Senators and Governor Newsom. Senators Dodd, Glazer, and Eggman are of particular interest in Northern California, so please encourage anyone you know in those districts to join us.

I hope you can join us next Wednesday night to support immigrant justice in California.