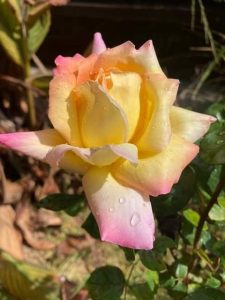 The above photo comes from Wally Bryen. It is of a Peace Rose growing in his garden.

The story of the Peace Rose is inspiring. It was hybridized in 1935 by the brilliant French horticulturist, Francis Melliand who saw the invasion of France as an inevitable possibility. He desperately sent cuttings to friends in Italy, Turkey, Germany and the United States. There is some evidence that the cuttings were on the last flight out of France before the German invasion.

The Peace’ Rose was finally named and introduced in the United States on April 29, 1945, on the very same day that Berlin fell. This momentous day was the turning point when the terrible World War II finally began to come to a close. Peace won AARS accolade honors in 1946 and the same day the peace treaty was signed with Japan. (Favorite Flower Names)