Win many LABC mourns the death of basketball legend, Bill Russell, a graduate of McClymonds High School. Below is a memorial post from the Golden State Warriors. We are grateful for his life and legacy. 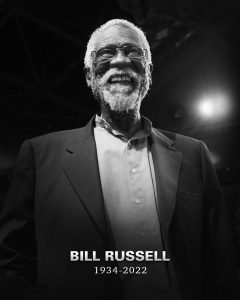 Bill Russell, who spent many of his formative years in the Bay Area, a true giant in the game of basketball, and more importantly, in the game of life. His championship resume, which included multiple State titles at McClymonds High School in Oakland, two NCAA championships at the University of San Francisco and a record 11 NBA titles with the Boston Celtics, might never be duplicated and solidifies his position as one of sports’ ultimate winners. But, while the accolades on the court were immense, it was his overall impact as a pioneer on multiple levels that will leave the greatest legacy from his iconic life and career.

From becoming the first Black head coach in NBA history to his never-ending advocacy for civil rights, equality and social justice, Mr. Russell’s reach stretched far and wide, and his tireless efforts in these spaces continued long after his playing career ended. Appropriately, the league’s annual NBA Finals MVP Award, which was named in his honor in 2009, signifies how valuable his contributions were to the game we love and the important groundwork that he laid for future generations.

On behalf of the Warriors, we offer our sincere condolences to his wife, Jeannine, his family and countless friends.