Upon your walls, O Jerusalem,
I have posted sentinels;
all day and all night
they shall never be silent.
You who remind the Lord,
take no rest,
7 and give him no rest
until he establishes Jerusalem
and makes it renowned throughout the earth.
8 The Lord has sworn by his right hand
and by his mighty arm:
I will not again give your grain
to be food for your enemies,
and foreigners shall not drink the wine
for which you have labored,
9 but those who harvest it shall eat it
and praise the Lord,
and those who gather it shall drink it
in my holy courts.

10 Go through, go through the gates;
prepare the way for the people;
build up, build up the highway;
clear it of stones;
lift up an ensign over the peoples.
11 The Lord has proclaimed
to the end of the earth:
Say to daughter Zion,
“Look, your savior comes;
his reward is with him
and his recompense before him.”
12 They shall be called, “The Holy People,
The Redeemed of the Lord,”
and you shall be called, “Sought Out,
A City Not Forsaken.” 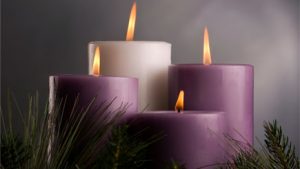 The city is a stadium, and it’s rocking. The people are shouting. They will not keep silent.

This game is like no other contest. The Underdogs are really underdogs: under-resourced, underrated, and always underestimated. They’ve been called the Forsaken. Their field is known as Desolation. It’s Where Dreams Go to Die. And yet they are still fighting.

Something happened in the locker room at halftime. Something was said or something was remembered because the players came out with heads held high. They didn’t score in the next quarter, but they didn’t give up any more points either.

And the people didn’t give up. Mourning turned to gladness. A kind of mantle of praise spread over the crowd. It looked like a wave.

Now this happens: Someone runs up the sideline, around the field, banging a drum. “For the city’s sake I will not keep silent,” says Krazy George. He passes the stick to someone else, and that one takes off around the field, followed by another and another. Cheerleaders circle the stadium.

In the last quarter, the game turns. The Underdogs run a flea flicker and score. The Topdogs can’t handle the onside kick, and the Underdogs recover the ball. On the next play, they tie it up. “See, your salvation comes!”

The Underdogs come to the line for the final play. Shotgun snap, the clash of wills, a pocket forms, and the quarterback heaves the ball toward the end zone. A Hail Mary.

“You will be called Oaks of Righteousness” flashes across the JumboTron as Oakland rises in unison.